Team Flower Power here (aka Nameless and Tameless, aka TeamDream)

We hiked up and down the Meadow Loop trail a least 3 times, collecting mad data everywhere we could. We’re investigating how wildflower plant diversity differs between the forested areas and unforested plains. In doing so, we’re measuring sunlight, wind, soil nutrients, and measuring plant diversity through species identification. Our favorite was the Truffala Tree (Monarda citriodora, Beebalm), which looks like a laddered daffodil.

During our afternoon break (it should be noted that we worked through our TWO union-mandated snake breaks), we played cards and napped in the sun. It’s glorious out here. 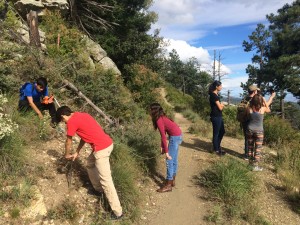 Also, the bravest of the gang woke up early to watch the sun rise. It’s been a looooooooong day.